Love for food is the common ground we all stand on. So, knowing foods that start with T should make you stand out and be admired among your foodie peers, all while enjoying wholesome foods.

This time, we have a list of foods that begin with T for your entire day – breakfast to dinner.

Foods that Start with T

First, let us look at some common snacks belonging to the letter T.

A corn tortilla cut into triangles and then either fried or baked makes the world’s most popular snack. The ingredients include corn, salt, vegetable oil, and water. There are several ways to eat them – the common thing is their crunchiness.

When eaten alone, they give you the taste of corn and salt. And nutritionally, tortilla chips serve as a relatively good carb and fat source.

Twinkie is a popular American snack also known as the “golden sponge”. It’s an snack among foods that start with T. It is a sponge cake with cream filling. The balanced sugary taste makes it a perfect light snack.

Nutrition-wise, a regular-sized twinkie has ample carbohydrates with decent fat and protein.

Toblerone is the famous swiss chocolate made with nougat, honey, and almonds. It’s unique for its triangular structure representing an array of mountains. The taste is also distinguishable from other nougat chocolates.

It will also serve as a good energy source with loads of carbs, sugar, and hints of protein and fiber. We recommend stocking it up on hikes, as small doses of the chocolate will keep you moving.

Here is another chocolate in foods that begin with T. Twix is layered sweetness coated with even sweeter chocolate. Each layer – including caramel, milk chocolate, and a cookie – gives you a different taste.

It also has one of the lowest saturated fat levels among chocolates while being a decent carb and protein source.

Breakfast Foods that start with T

Tartine, also known as the open sandwich, is crisped bread slice with different food items on top. Smaller tartines are also used as exquisite appetizers. The taste depends on the toppings and the bread type – feel free to experiment with the breakfast item.

Usually, the nutritional facts of tartine are made from the bread, eggs, vegetables, and some sauce. That means it is a super healthy breakfast item with loads of proteins and carbs.

Tea is a popular beverage made with the leaves of Camellia sinensis. Given the soothing and tremendous nutritional benefits, the hot beverage is a mandatory part of morning routines in many countries.

You may drink it with hot water or add some milk and sugar. It will give you a great taste and aroma in any version.

Healthy fruits are always a good breakfast decision, right? Well, the citrus fruit tangelo – a hybrid between mandarin oranges and tangerine – is exactly what you need. The guava-looking orange has a tangier yet sweet taste to refresh you with a kick in the morning.

Nutrition-wise, like its family members, it offers a lot of vitamin C and dietary fibers.

Tampeh is an Indonesian dish of deep-fried soya beans that have been fermented. It is often eaten as a breakfast item for its light texture. You may bake it, fry it, or crumble it; it will give you a delicious nutty flavor packed with a lot of nutrients like vitamin B, iron, protein, and fiber.

Oh, and it has no cholesterol at all!

Terrine is layered meat and vegetables in a rectangular loaf. It is a famous French food that is served either as a whole loaf or in slices with an add-on like bread and vegetables. The fun fact about this food is that its cooking dish is also called a terrine.

The taste is like that of a liver pate – meaty. Nutritionally, it is high in carbs, proteins, and saturated fats.

Tofu is coagulated soy milk in blocks. You may eat it raw, baked, grilled, or scrambled. On its own, its bland and sour, but the flavor absorbing capabilities make it special for the foodies.

Tofu is also super healthy with loads of protein, fat, and minerals such as manganese and phosphorus.

Despite the toast in the name, Texas toast is buttered bread – both sides – that is grilled. The thickness keeps it soft and moist. It either has a buttery or a garlic taste which is complemented by loads of toppings and sides the bread goes good with.

Nutritionally, it is a nice carb and protein source with small doses of potassium and sodium. 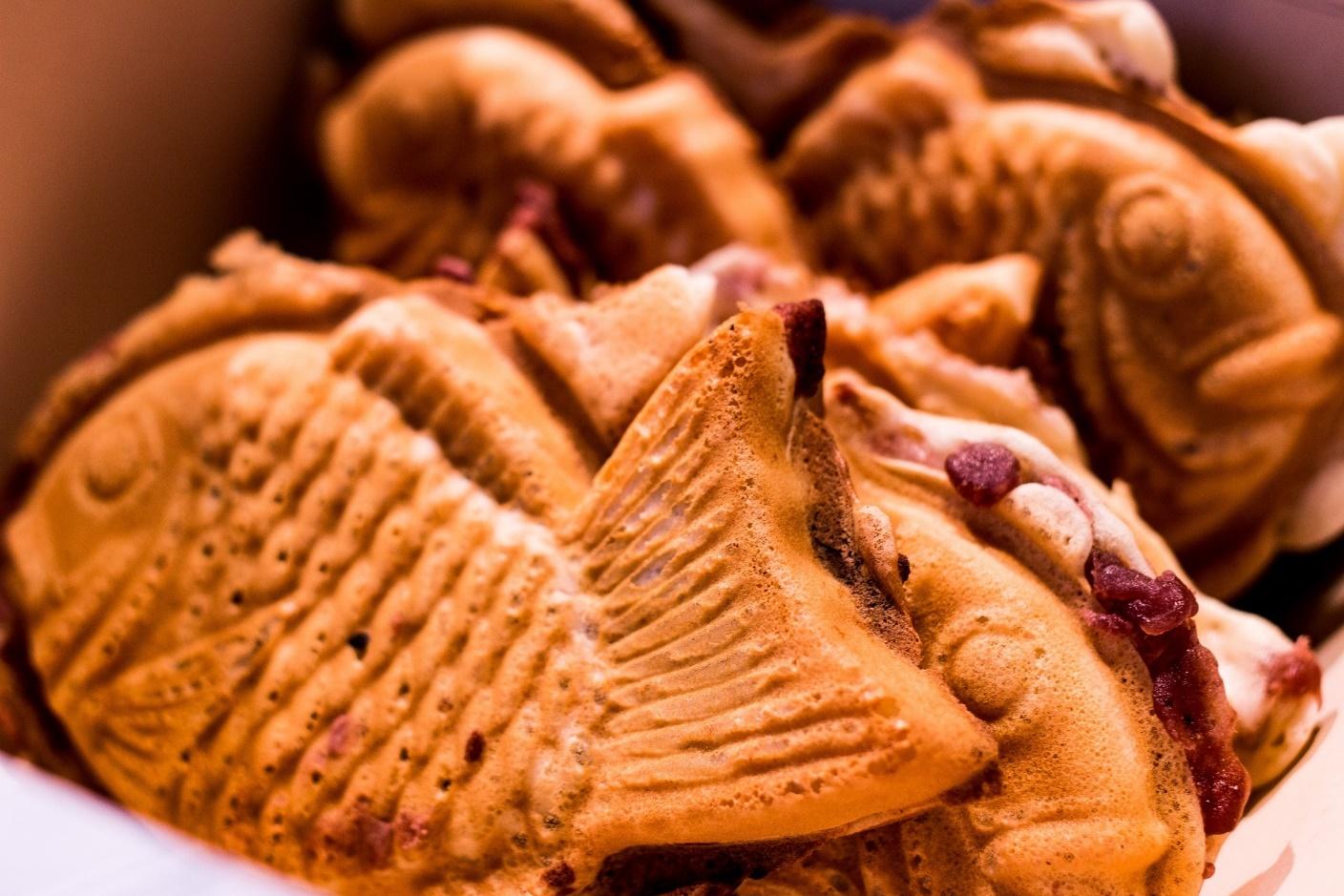 Tayiaki, meaning grilled sea bream, is a Japanese cake known to be baked in the shape of a fish. It is a typical breakfast snack made with batter and sweetened azuki beans. It has a similar taste to a chocolate-filled pancake.

The cake also has good nutritional value. A single cake contains enough carbs and proteins to prepare you for an active day.

Tripe is an unusual food for breakfast, but it is used as one – usually with matooke. It is the stomach lining of farm animals with a taste relatable to a liver.

You might not like its raw smell, but the nutritional value makes up for it. It has very high levels of vitamin B12 and protein.

Lunch foods that start with T

Taquitos are fried tortilla rolls filled with meat, cheese, and some sauce. It’s a Mexican dish that makes a great lunch food. They are often eaten with sour and creamy sauces. They give the most amazing blend of meaty cheesiness and tortilla crunchiness.

They are also quite healthy – more if baked – with high levels of carbs and protein.

Here is another Mexican lunch item in foods that start with T. Tacos are soft tortillas that are stuffed with grilled meat, vegetables, and different sauces. The tortilla is also cooked into taco shells that give it the signature shape.

They are incredibly delicious, with several mouthwatering flavors put together in one. And all of it while being rich in protein, carbs, and fat.

Tamale is Mexican food made of corn dough wrapped in corn husks. The wraps are then steamed to cook the meat and cheese fillings. It tastes like a cheesy cake of corn with steams. You’ll also find sweet tamales – the signature item is the corn husk wrapping.

And they also have a great nutritional value – loads of minerals such as iron, zinc, and  potassium along with protein and crabs.

Tater tots are a side dish made from deep-fried grated potatoes. Also called Potato Croquettes in the United Kingdom, they are merely balls of fried potatoes.

Taste-wise they have your regular fried potato flavor, only complemented with the adding seasoning like of garlic or onion powder. Nutritionally, they have the potential to make you obese, but with decent carbs and protein levels.

Tenderloin, or fillet, is the tenderest beef part in the loin – hence the name. It makes the most tender and buttery textured low-fat steak with a mild flavor. The steak is also thicker than your usual steaks.

It is packed with protein, fat, iron, vitamin B-6, and some milligrams of potassium and sodium per a 100-gram serving. It might be a little more expensive than other beef parts.

Tilapia is an herbivore freshwater fish that is mostly genetically engineered. As fishes come, tilapia might be the blandest with close to no flavour. It is that fish that doesn’t taste like fish.

Nutritionally, it is very high in protein – lean white meat – and fatty acids – often considered too much – with a decent amount of minerals like phosphorus and selenium. 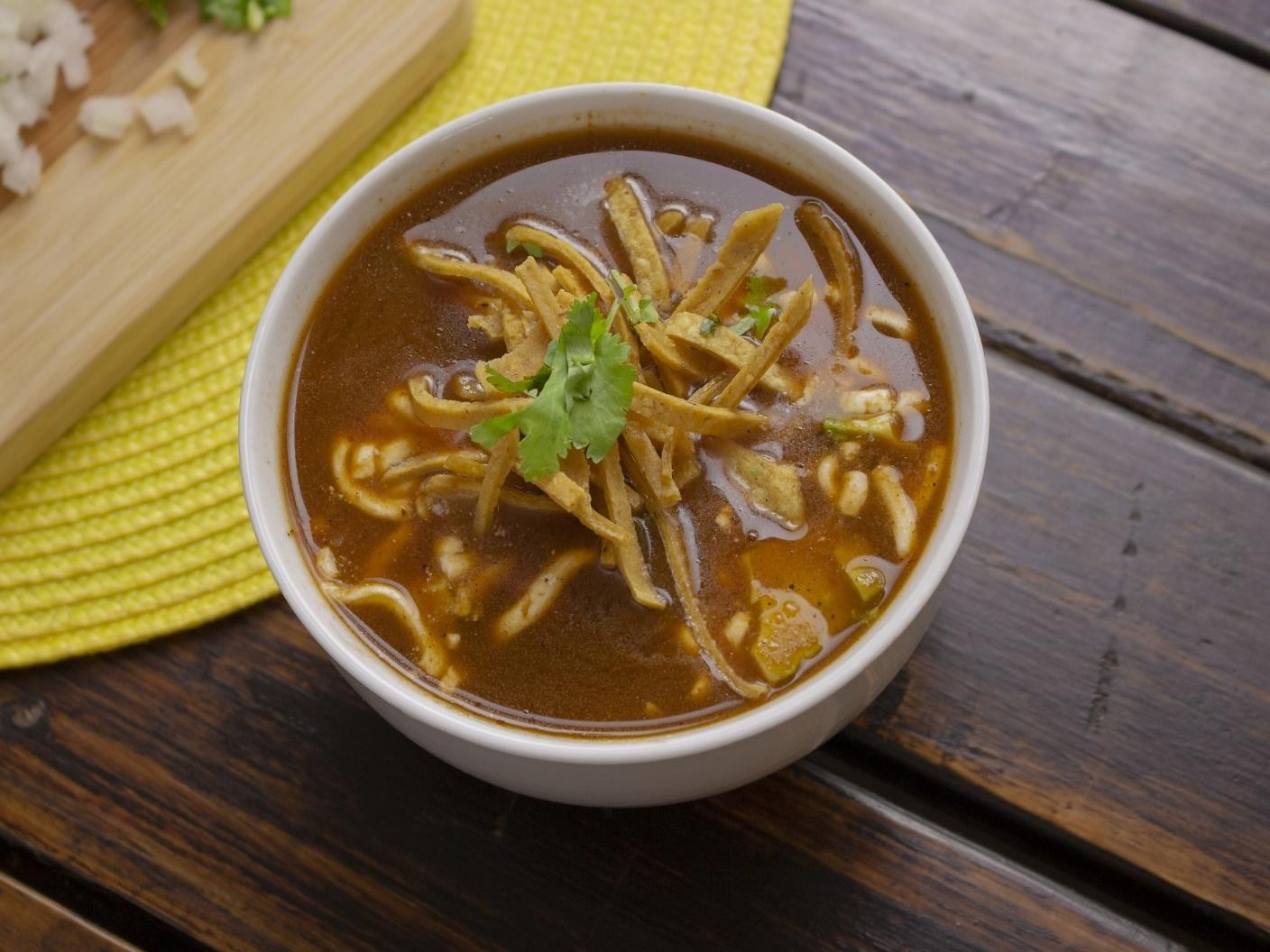 Tortilla soup is a versatile item in our foods that start with T. It contains slices of tortilla with soup made with several taste-dependent vegetables. You can serve this soup with anything, and it’ll complement the experience.

It gives you an amazing blend of flavors while being rich in carbs and some levels of protein.

Tortilla wrap is one of the most eaten fast-food items all around the world. The wheat tortilla encloses grilled or fried meat and cheese, fries, and many vegetables. It super easy and delicious to make.

Nutritionally, it is packed with protein, carbs, multivitamins, and several minerals.

Dinner Foods that begin with T

We’ll start our dinners with something sweet. Tiramisu is an Italian dessert made with coffee-dipped ladyfingers, cheese, cocoa, and eggs. You’ll find several versions of this experimental dessert with common layered shapes.

Taste-wise, it gives you the most premium of coffee and cocoa blends. And nutritionally, it’s a nice carb and fat source with adequate protein.

Tajine is a North African dish made with spicy meat and vegetables. It is prepared in a clay dish known as marqa. It is a slow-cooked dish that does justice to the combination of different flavors in this dish.

It’s an excellent food for high levels of protein, carbs, fats, vitamin A, vitamin B-6, and sodium.

Tempura shrimps are deep-fried battered shrimps. The tempura is made from water, eggs, and flour – it fries to give the golden-brown crunch. Tempura shrimps are taste clean and fresh in the crunchiness and like chicken for the meaty part.

These shrimps are also a good source of fat and protein.

Tagliatelle is the ribbon-like pasta from Italy. It only takes water – preferably salted – to cook and can be used with anything you like. The taste is just like your regular pasta, depending on the ingredients.

It’s a rich crabs source followed by protein and magnesium in minerals.

A tart is an open pastry with sweet fillings and toppings. The hollow crust is made with sweet, buttery, and creamy dough and may be filled with cream, fruits, or anything you like.

Nutrition-wise, there’s a good amount of carbs in the sweet dish with some protein and minerals –healthier the fillings, healthier the tart.

Teriyaki is a Japanese dish containing soy sauce marinated meat that is grilled and served with rice. The taste is tangy-sweet with slaty under the flavor of the soy sauce. It is also the method of this cooking.

Nutritionally, there is no fat. It does have decent protein and carb levels along with minerals like sodium – a lot of it -, magnesium, and potassium. 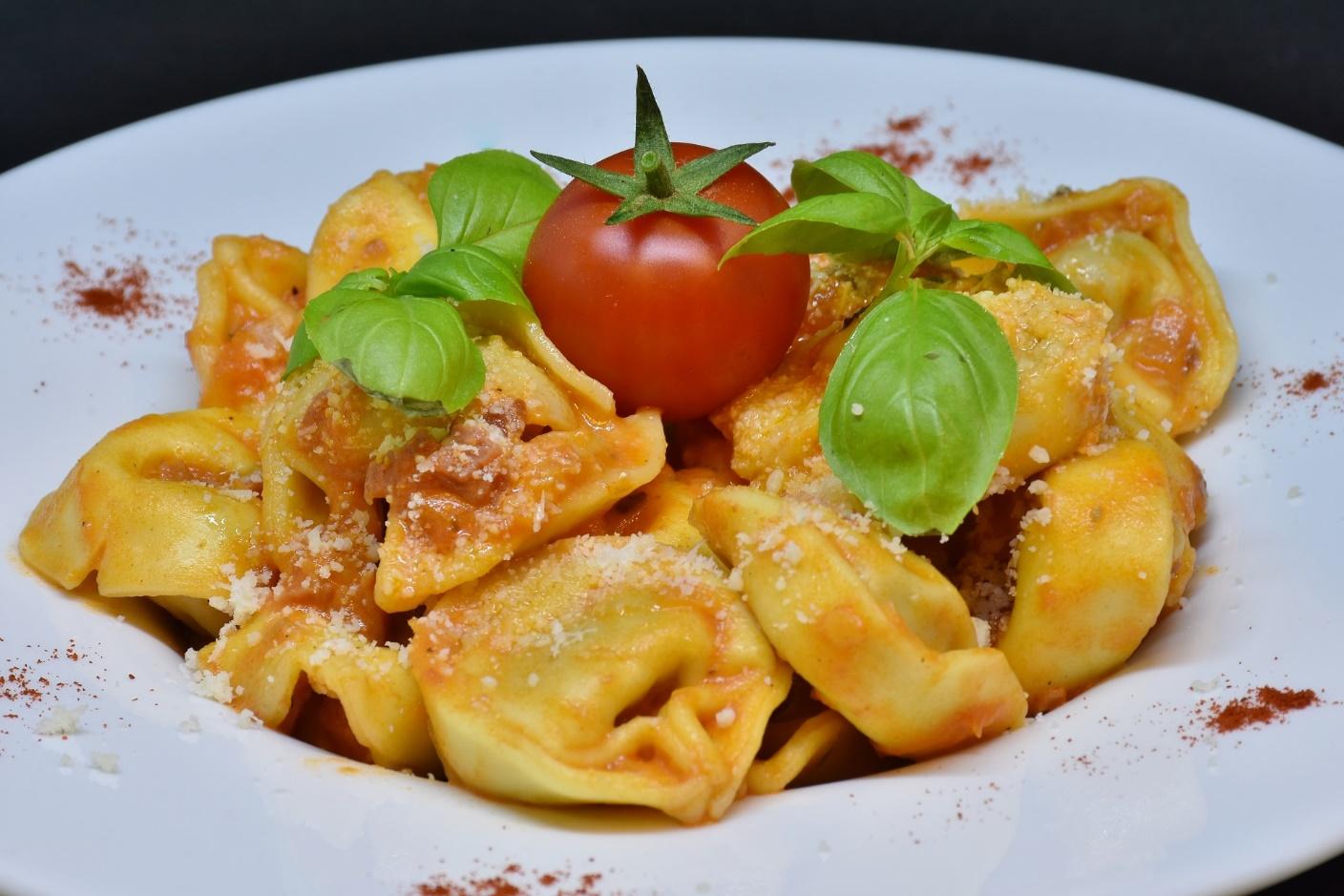 It’s another Italian pasta, only in a different shape – rings. It’s also filled with some meat, cheese, and vegetable like spinach. You would prefer to eat this with a sauce to add to the flavor of heavy fillings.

The taste is filling-dependent – mostly cheesy and spicy. The pasta itself is only unique in shape. And nutrition-wise, the crabs and protein are high, followed by some sodium and calcium, while the fat levels remain low.

Trout is the freshwater fish that is worthy of making to your dinner table. It has other types such as the Brown trout, Lake trout, and Brook trout. Trout too, has a somewhat bland taste as is often termed as the chicken of fish.

On nutritional grounds, it is loaded with protein, omega 3 fatty acids, and vitamin B12.

Here is another fish belonging to foods that start with T. Tuna is perhaps the most popular of fishes. Saltwater fish is readily available to the public around the globe. The taste is seared and oily, which changes after cooking.

Nutrition-wise, we would recommend that you keep it in your diet plan. It is super loaded with protein and vitamin B12 with normal levels of magnesium, cobalamin, and magnesium.

We’ll end this article of foods that start with T with the thanksgiving favourite. Turkey meat has a similar texture to chicken but with a stronger flavour. It has become an unestablished law to prepare turkey meat for the entire family on traditional holidays such as thanksgiving.

As for nutrition, turkeys have high levels of protein and vitamin B-6, followed by fat, sodium, potassium, magnesium, and cobalamin. The carb levels stand at 0.1 per 100 grams of turkey.